As in every programming and scripting language, in PowerShell there are special characters that you can use to represent characters, that we are not able to find in the standard set. In this tutorials we will see those PowerShell special Characters and what is their use.

The null character is presented in PowerShell output as an empty space. It is not the same with $null variable. As per Microsoft, this allows you to use Windows PowerShell to read and process text files that use null characters, such as string termination or record termination indicators.

The Alert character can send a beep sound to the computer’s speaker. You can use this character to warn the user for an action that he is trying to perform.

The escape character is most commonly used to specify a virtual terminal sequence (ANSI escape sequence) that modifies the color of text and other text attributes such as bolding and underlining. These sequences can also be used for cursor positioning and scrolling. The PowerShell host must support virtual terminal sequences. This can be checked on PowerShell v5 and higher with the boolean property $Host.UI.SupportsVirtualTerminal.

The form feed character (`f) is a print instruction that ejects the current page and continues printing on the next page. This character affects printed documents only; it does not affect screen output.

The new line character inserts a line break immediately after the character and continues the text from that line. 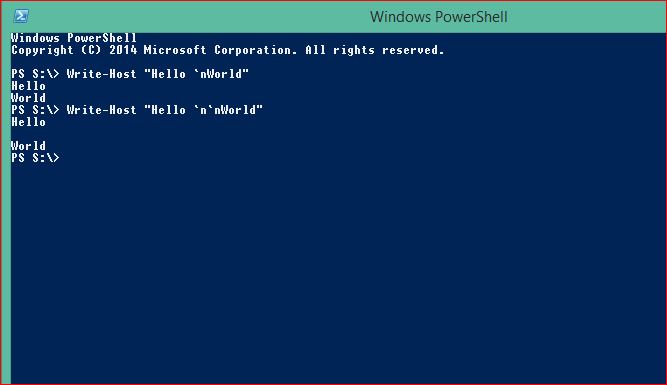 The carriage return character will not output any text prior to it. It considers anything prior to it as a different line. As you can see in the example below you can combine it with new line character and then both parts of the text will be provided to output. 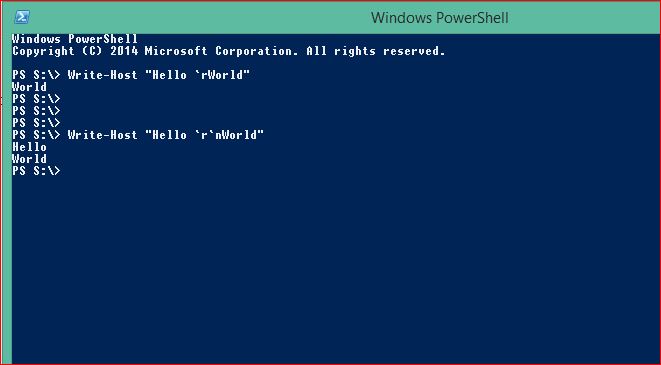 The horizontal tab character goes to the next tab and continues the rest of the text from that point. As per Microsoft, the default for Windows PowerShell tab space is 8 spaces. 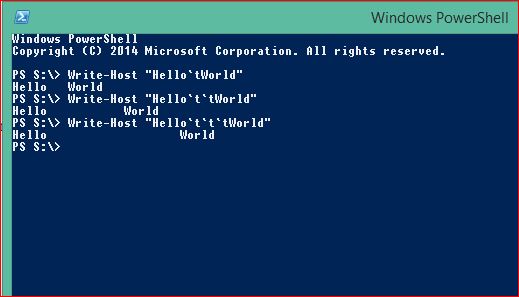 The vertical tab character goes to the next vertical tab and continues to write the rest part of the text. It can only affect the document printouts. Nothing will be done on the screen.

I hope the tutorial about PowerShell Special Characters is helpful.

Please let me know your comments and thoughts.

You feedback is appreciated.

We use cookies to ensure that we give you the best experience on our website. If you continue to use this site we will assume that you are happy with it.Ok