In this tutorial we will see about Windows PowerShell Sessions – PSSessions. We will see what are those PSSession, and how and when we need to use them. It is important to know why you need to use them. After you go through this tutorial it would be good to work with them, in order to get more familiar. After you practise you will see that it can help you a lot while working on remote computers / servers.

A session is the environment that Windows PowerShell runs. Every time that we run Windows PowerShell, a session is created. In this session we are able to run commands and functions. Also we are able to add modules, snap-ins, aliases, variables and custom items. This session that is created for us, we are not able to managed it. The items that will be created in a session a exist only in this session and they are deleted when we exit the session and the session ends.

We are able to create our own sessions, which are user-managed. These sessions are called Windows PowerShell Sessions or PSSessions. We are able to create these sessions either on local or remote computer. In a PSSession, we are able to run commands and create items, as in the default session. But unlikely the default sessions, we are able to manage the session. We are allowed to get the active PSSessions, configure them according to our needs, remove them, disconnect and reconnect to them. When we create a PSSession, it always remain available until we delete it, or it will time out. PSSessions are mostly used to run multiple commands on a remote computer. The connection that is established, when we create a PSSession with a remote computer, is persistent.

The current session, in Windows PowerShell, is always the session that we are working on it. This might be the default session, a PSSession or a temporary session.

As we mentioned above, PSSessions are used when we need to run multiple commands. In order to create a PSSession, we need to use New-PSSession cmdlet. The format of the cmdlet is below:

The above command will create a persistent session with “RemoteComputer1” in order to run multiple commands on that computer. As soon as the PSSession is created, in the output we will get the PSSession object that has been created.

We are also able to create sessions on multiple remote computers at once using the same command. In ComputerName parameter, we need to provide multiple computer names separated by comma ( , ).

If you like to refer to a specific session, you can refer to them by using: 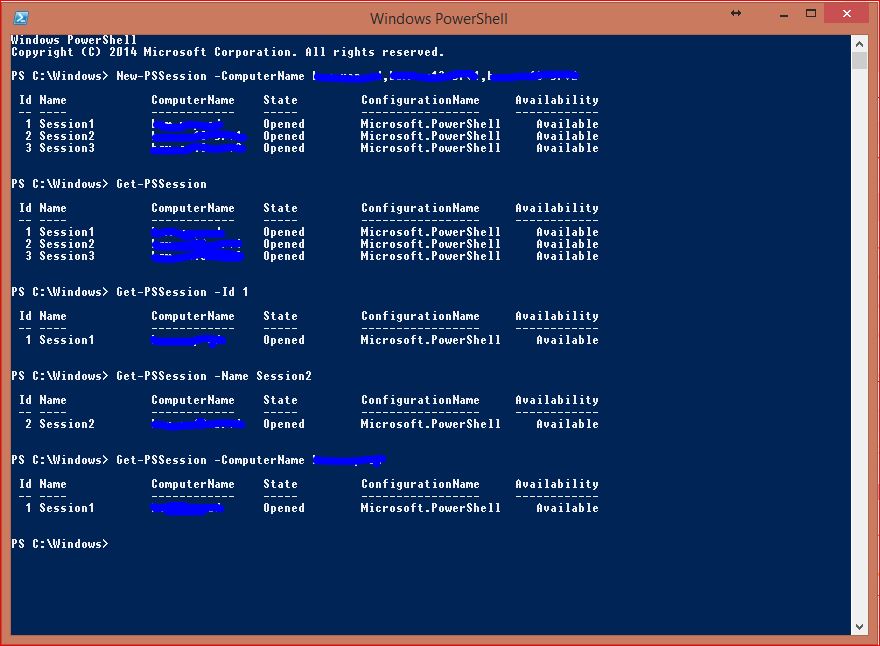 You are also able to save the sessions, that are retrieve by Get-PSSession, in variables. See the screenshot below: 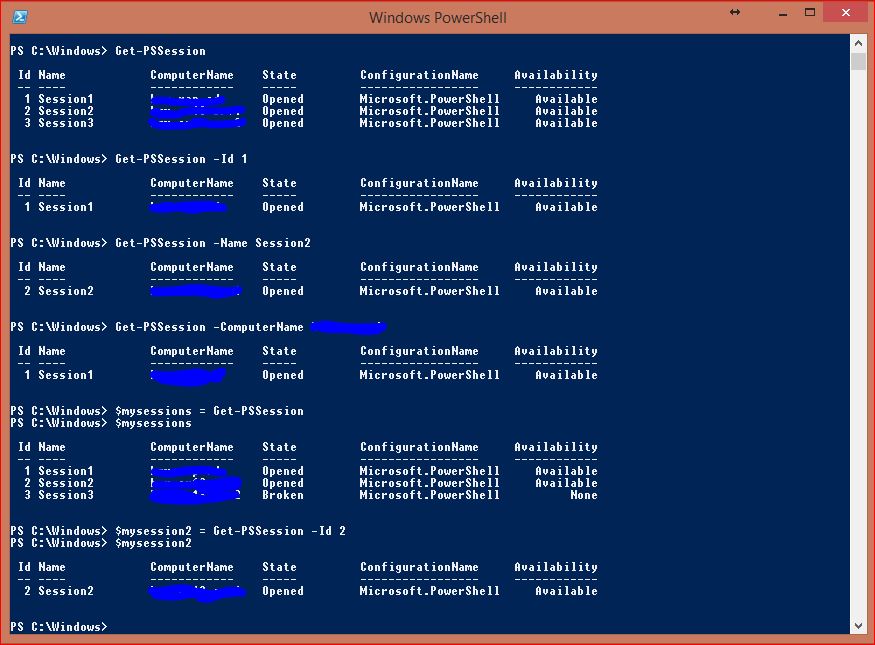 As you can see above, when I used Get-PSSession without ComputerName parameter, I got two PSSessions, for the two remote servers that I have created one, in my current session. Note here that I had already another Windows PowerShell running on another window and created a session to the first server. When I run Get-PSSession command including ComputerName parameter to get only the sessions related to the first server only, I got back that there are two sessions for the particular server. It provided my also the session to that server that I had created using another session.

By using the Session Parameter you are also to specify the PSSession object that you want to remove. Check the below screenshot to see the different ways.

You are also able to set a timeout limit, in order for your PSSession will be removed when it will time out. In order to specify the time out time along with other advance options for you PSSession you need to use New-PSSessionOption cmdlet. New-PSSessionOption creates an object with different options that you can specify when you are creating you session to a remote computer. You need to specify the option when you will use New-PSSession, Enter-PSSession and Invoke-Command. The below example will force our session to time out after 5 minutes of idle time. 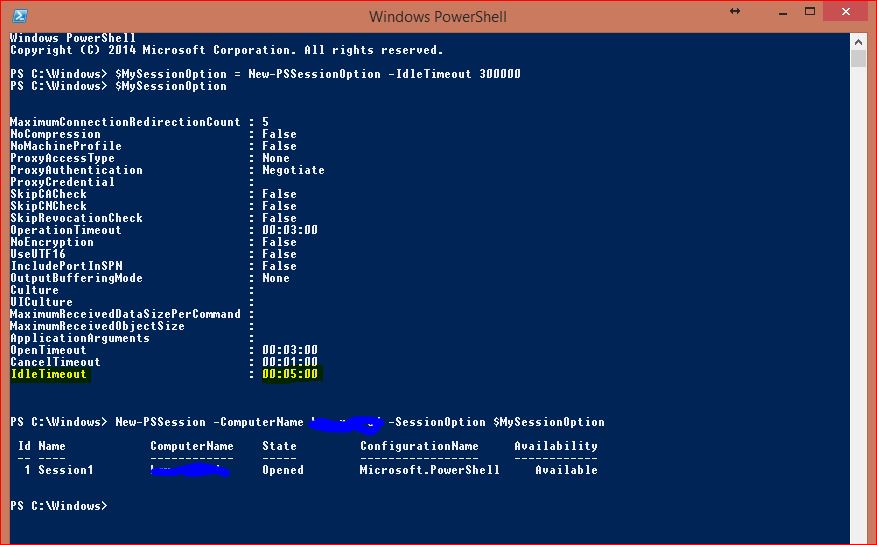 As you can see above, I set the Idle time out limit to 5 minutes (300 000 miliseconds) and then used this option when I created my PSSession with the remote server. This session will close after the idle time out limit has been reached.

You are able to get the list of related commands by using the below 2 methods: 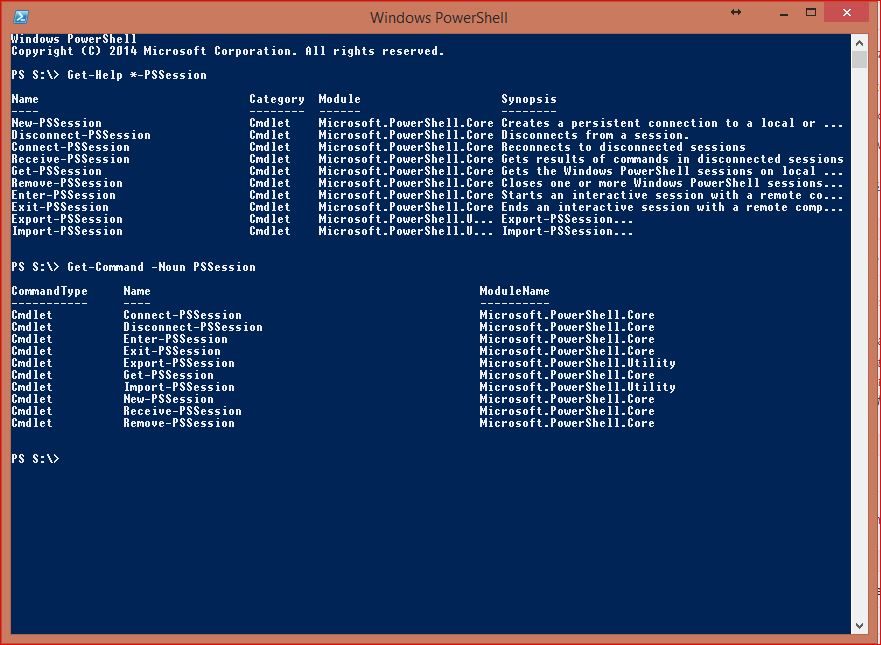 Running Commands in a PSSession

In order to run commands in a sessions you need to use Invoke-Command cmdlet and specify the session and the commands to run.

Note the difference in ScriptBlock parameter. When I am saving my commands in a variable, I am not using curly brackets.

I hope the tutorial about Windows PowerShell Sessions – PSSessions is helpful.

Please let me know your comments and thoughts.

You feedback is appreciated.